My House of Memories - The Stamp Man Challenge

Hi, this is my last post of 2011!!!  Having spotted the new challenge over at The Stamp Man, The Stamp Man Awards - Your Favourite/Best Project from 2011, I just had to join in with a project I made in my early blogging days.  There's a £30 prize in the random draw, and 4 runner up prizes.  2011 is the year I started blogging and the project I'm entering is one of my very first altered projects (possibly the first!) - it is also one that is very dear to me, and also to my mum as it hangs proudly on her wall.  You can view the original post, from May, here.

A bit of background to my project:  earlier this year my lovely uncle passed away, after losing his battle with cancer.  I wanted to do something special for my mum's birthday so I decided to decorate/alter this house shaped curio box.  As my uncle was into fishing in a big way, he lived in New York for many years, and was married to a wonderful Japanese lady, I tried to symbolise these parts of his life in this project.  All of the photos I used on this were taken by me when I went to stay with him and his wife, about 25 years ago.

The box was painted with acrylic paint, and a little crackle accents and metallic gold rub-on added here and there..... 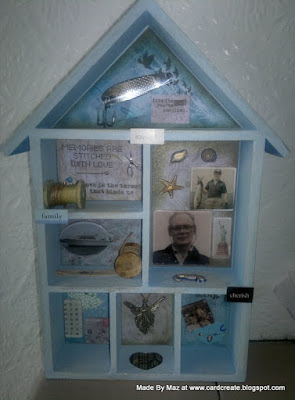 .....the papers used for the backing were from the TH Shabby Chic Collection, and a little DI on the edges. 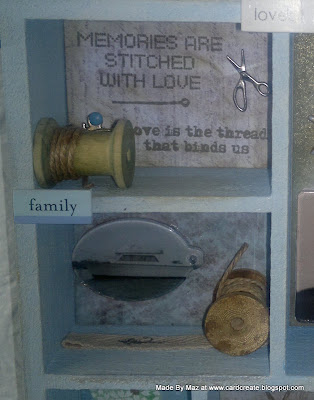 The cotton reels were coloured with DI and some twine wrapped round, and a little sewing machine charm sits behind one of them, although not visible.  The photo of the boat was his own boat which he went out fishing on (I caught a few fish on that boat when I was there!) .....

.....the photos have all been mounted on TH fragments and a few sea themed charms are covered with gold mixative.....

.....a fishing hook from the £1 shop was attached to the top recess and the sentiment "live the life you've imagined" attached.....

.....some japanese elements added, such as dps covered with fragments, and a little kimono (left), and a heart (middle).  An angel on some cord was also attached (middle) and another japanese heart and a photo of my uncle and I (gosh, I look young!!!), topped with a fragment (right).  The words "love", "cherish", and "family" were attached to the front of the box in various places.

Stamps used were from Tim Holtz and Creative Expressions.

Just a great project Marie, I can see why it's your fav from last year for so many reasons :-) Happy 2012, Debi x

This is beautiful Maria, and a lovely way to record memories of someone dear.Jean x

What a wonderful keepsake and beautiful project. So many special little details. Thanks for joining in The Stamp Man Awards challenge with us and have a wonderful week. Angela

Proud to be on the Design Team 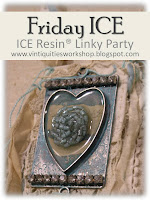 Every 2nd and 4th Friday of each month.

Some fabulous and inspiring blogs

It would be lovely, and very flattering, if you take some inspiration from any of my projects, but please do not copy or link my photographs directly. Thank you. Maria x

Maria
Hi, my name's Maria and I live in Manchester with my partner Dave, my daughter Hannah and grandson Ethan, our springer spaniel Jack, and four cats. I love wall hangings and other bits and bobs, and even cards sometimes, and particularly love rubber stamping. I work full time in accounting so it's a nice way to wind down and leave work behind and disappear into my own little space. xxxxx

I was a winner in the March Challenge 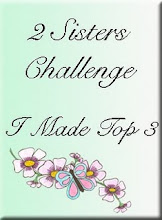 The Get Creative Challenge Blog

and I won Marie's Embossing challenge no 10!!!

Bling It On Challenge Blog

The Sisterhood of Crafters